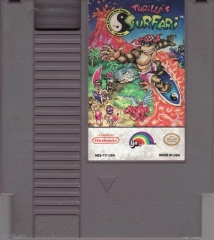 I finally found the second T&C Surf Design game. Even though it was made by LJN I still loved playing the first one and just had to have the second one Thrilla’s Surfari. It’s more of a platformer type game and just not as good as the first one. You play as Thrilla Gorilla trying to save your girlfriend from a witch doctor. There are skate boarding levels, surfing levels, and even a shark riding level. I have only played it for a few minutes and didn’t get very far. I am going to give it a few more tries but now I am leaning on labeling this one in the Nintendohard category along with Battletoads and Teenage Mutant Ninja Turtles. The only way to beat games in this category is to cheat. 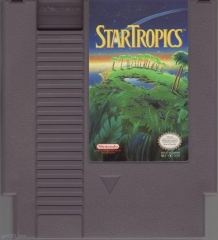 My next find was StarTropics. I loved this game and can not wait to play it again. The plot is that you are trying to save your archeologist uncle named Dr. Jones who has been kidnapped by aliens. The Indiana Jones reference is what made me buy the game back in 1991. What’s odd about this game is that it looks like an RPG but has a very linear storyline broken up into chapters. You talk to people in the towns like an RPG but fight in the dungeons like Zelda. Also if you play this game remember the code 747. The code was on a piece of paper that came with the game that you had to put in water to read. I never did figure that out, I wound up calling the Nintendo help line and they told me. 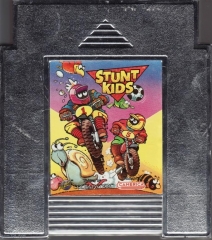 I am a sucker for unlicensed Nintendo carts and found two of them, Stunt Kids and The Ultimate Stuntman. They were both made by Codemasters and released by Camerica. Codemasters is reportedly the oldest British gaming company and is known for producing budget titles and for creating the Game Genie. Surprisingly these two budget title games are pretty well done. I was expecting something horrible and was pleasantly surprised. The graphics look great but the game play is pretty simple which isn’t necessarily a bad thing. 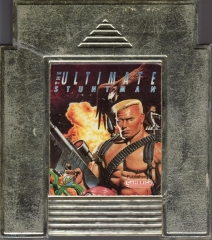 Camerica carts were designed to bypass the NES lockout chip by sending out signals to the chip that froze it up. All of the carts produced by Camerica are gold or silver and have a switch in the back so that you can play it on European or North American consoles. There is also a weird hump on the back that makes it stand out when I put it on the shelf. I also like the fact the warning on the back says “Do not drop. Do not get wet. Do not leave in direct sunlight.” For some reason this makes me laugh. I tried to get a scan of it but due to the hump it won’t scan well.

If you would like to add me as a friend just contact me with your ID and Network. My ID’s are: